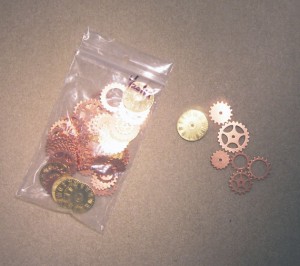 A nice find at the Pasadena Bead & Design Show. Got them from StringBead. The best price I’ve ever found for steampunk Cogs and Clockfaces, too! Am toying with the idea of using them in my Tardis Pod cosplay. But will I have time to start and finish the costume along with everything else I’m doing? If not, they’re going into jewelry!

After two days of crazy shopping at the wonderful Pasadena Bead & Design Show in Pasadena, CA, here are our pics for favorite vendors and what they offered: 1. Beads & Magic Wishes – for their amazing selection of colors in size 15 delica beads. 2. String Bead – where we found steampunk cogs and clock faces for 50 cents a piece!!! 3. Sonoran Beads – SilverSilk. Silver Wire wrapped around tiny, silver or gold beads. The wire comes in some beautiful colors. 4. L.A. Source Gems – out of Alhambra, CA. for their selection of brand new snake skin jasper. 5. Filigree Me for their wide selection of antique brass stampings. 6. Metalz n Beads for Carol’s wonderful help and advice on surface treatment of metal and patinas. You are the “Patina Queen”! 7. The Lipstick Ranch for their amazing copper stampings. 8. And of course, Paula of Paula Radke Art Glass for putting up with us waiting patiently to interview her inbetween her many customers and class students.

Okay, I was going to keep this out of my blog – the blog I want to be a sanctuary for non-real-world stuff. The blog that celebrates cosplay and fun. But now I’m pissed.

You’ve been living under a rock if you haven’t heard about the terrible tragedy today in Colorado when a gun-wielding maniac mercilessly mowed down a midnight premiere audience watching Batman: The Dark Knight Rises. A dozen dead, 50 or more injured, including a 3-month old. It’s enough to make you want to get off the internet and take some real-world action, like protesting, skinning this sick idiot alive or throttling the parents of this murderer for raising a psychopath, or hanging our impotent U.S. politicians for accepting no blame or responsibility for what went down today and NOW everyone even vaguely connected to today’s abomination are blowing reactions completely out of proportion.

AMC, like any other entity fingers are getting pointed at, is clutching their shriveled balls and wailing, “We aren’t going to allow any guests into theaters ‘in costumes that make other guests feel uncomfortable and we will not permit face-covering masks or fake weapons inside our buildings“.

Let’s look at the facts here, people, once you stop clutching your non-existent nuts, close your mouths and open your ears and minds.

Number One – the shooter had red/orange hair. This asshole may have claimed to be the Joker, but all the Batman movies I went to, the Joker had green hair. If he was going to pull off any convincing character in his last moments on Earth, he could have at least gotten the color right. But, oh yeah, every other person I see on the street and 65% of the costumers and non-costumers I see at any and all conventions I regularly attend have some sort of tint, dye or anime type color to their hair!

Number Two – and this is a big one – HE WASN’T IN COSTUME!!! How hard, how loud, HOW LONG do I have to wail to hammer this fact into the idiots that are trying to do their own version of racial profiling on the Cosplay community?!? Dark clothes and flack gear do not a costume make! The Joker never wore them, but apparently any person who wants to survive the hordes of SWAT, FBI and police officers that are going to take him down will wear them. DUH!

Excuse me, AMC, but who are you to judge “costumes that make other guests feel uncomfortable “? I shared a post on Facebook this week of a clever makeup artist who painted large, freakish anime eyes on a girl. That weirded me out seeing it in real life, but I would never assume anyone with anime eyes was a gun-toting murderer!

Now I may have the opinion that the Batman movies of the last two decades or so have been so darkly violent they attract these kinds of people. Even Heath Ledger had nightmares due to his role as the Joker and it might have driven him to overdose, who knows? But this nutjob’s sense of couture DOES NOT GIVE AMC ANY EXCUSE TO PENALIZE COSTUMERS FOR A MENTALLY ILL PERSON’S BEHAVIOR!

AMC, your only crime is that you left a door ajar and someone snuck in without a ticket. How were you or anyone else to know that it would be someone who would give your theater or the Dark Knight a real-life bad name? 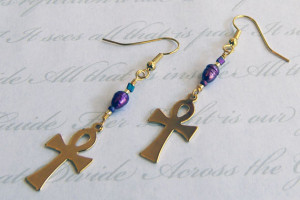 I was rushing last last night/early this morning to tidy up my Etsy earring store, The Ears Have It. Seeing that the best selling items were getting buried at the bottom of items I was relisting, I created a category called, “Best Sellers“. I chose the top five selling items for this category as one of the last things I did before I fell exhausted into bed at 2 o’clock in the morning.

This morning, not particularly thinking about the store I had spent so much time tidying up last night, a thought occured to me. These Best Sellers were trying to tell me something I had been chasing after for a couple of years. They were lying in wait until I had a chance to calm down from the frenzy of creating stock and promoting them before the tapped me quietly on the shoulder and said, “Hey, you need to notice something here”.

When they got my attention, they said, “Hey YOU! This is your target market!!!”

Startled, I drew back for a moment. This wasn’t what I was expecting to learn. In fact, I wasn’t writing this article in search of who my target market was. I had simply seen a trend of all my best sellers being items that incorporated symbols and the thought fascinated me. In fact, to diverge here for a moment, they made me proud of my customers. With all the Facebook posts and even one on Twitter recently about Gay Pride, Hate Crimes, Homophobia, etc., etc., etc. my customers are strong, brave and not afraid of these parts of their lives.

How do I know this? 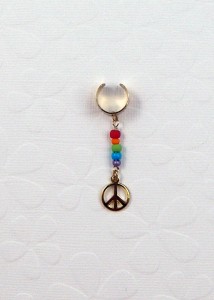 Because they dare to wear those symbols that others find provocative. Peace signs, Ankhs, Rainbows, symbols that point towards one’s Pagan Path, towards their sexual orientation and even their political beliefs. I dare not presume to say any one of my customers are any of these things just because they purchase them, but they are definitely enlightened individuals that dare to wear what they want to wear in a world that sadly would judge them – right or wrong, for what they chose to accent their couture.

So, because our outer selves are a reflection of our inner selves,  I ask you to ask yourself and your customers why do we wear what we wear? Dig deeper than the “it’s pretty” or “the colors match my outfit” excuses. Why are they not afraid of other’s base (and sometimes ignorant) reactions? The answers might lead you and them to a journey of self discovery and help you serve your customers better in satisfying their need to stand up and out in their world. Last month saw the first Denver Comic Con with a healthy starting attendance of nearly 20,000. There was a strong presence of the Doctor Who community in cosplay, attendees maxing out panel rooms and queueing to see a full-size Tardis. It is encouraging to see Colorado get their crack at getting some Who love in their own backyard. Thank you, Heather Maloney, for covering this and bringing it to the attention of the Doctor Who community on Twitter. You can read her full article here in the examiner.com. If you aren’t connected to her on Twitter at @DrWhoHeather, you just aren’t getting enough Who coverage in your life.

During the dry spell between series of Doctor Who, I am determined to keep myself busy with all things Who happening off telly. If there is something cool out there, I’ll bring it in here and we can all squee over it, enjoy it or politely clap – whichever you feel inclined to do.

With this in mind, I hit paydirt today in the form of some beautiful cosplay featured on the Doctor Who Cosplay Livejournal forum. I just couldn’t pass these up…

Here’s an amazing demonstration of the framework for wings for a cosplay character. The instructions are at: http://www.instructables.com/id/Articulated-Wing-Framework/

There’s nothing that messes up the look of a great cosplay anime costume faster than a ratty-looking wig! Head on over to Mico’s Costume Blog for great tips and pictures on how to restore yours.

It has been confirmed at the Anime Expo website and on their Facebook page that Hatsune Miku will be one of their concert guests this year. After doing a google image search on her, I was amazed to find animations of her, pvc figures and cosplayers showing off their versions of her costume. I wasn’t even sure if she was real – was she an anime, a manga  or a real person? Turns out she is at least two of those…a “virtual” singer who gives “live” concerts whilst projected against a special background. Gotta love those Japanese for coming up with a new spin on live concerts. This I gotta see!

(Thanks to Ziqi for reposting this from CottonCandy’s blog so I got the chance to see her! Ziqi’s blog is at http://news.monsterlittle.com/?p=3211
Visit CottonCandy at http://cottondream.blogspot.com/2009/04/nendoroid-miku-attack.html)

Am at San Diego Comic Con this weekend. Overwhelming, as usual. I stopped by the Tonner booth (stumbled across it, actually) and got to see the Doctor Who dolls up close and personal. The Tennant one looks better here than in the photos. The Martha, Jack Harkness & Gwen dolls are awesome. Am contemplating getting the Tennant Doctor doll so I can make him the blue outfit. Wonder how many people would buy it if I sold them? Hmmm….