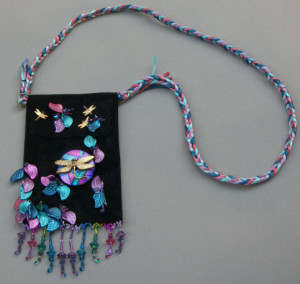 History – Before there were beaded bottles or peyote stitched bracelets & pen wraps, there were cellphone purses & amulet bags.

One day I was in a local leather shop and saw some beautiful, soft pigskin leather. I couldn’t help but pick it up and marveled at its smooth, silky texture, its perfectly dyed black color and how unlike it was from the thick, stiff hides all around it. There were many other colors, but I kept going back to that luscious little piece, as if it were calling me to do something with it. It was a perfect canvas upon which to bead and I realized in my joy of its discovery that it was thin enough to run through my mother’s old Singer sewing machine. I had to buy it!

On other color I happened upon in that table’s pile of soft, flexible leathers was one of a deep blue – almost purple. 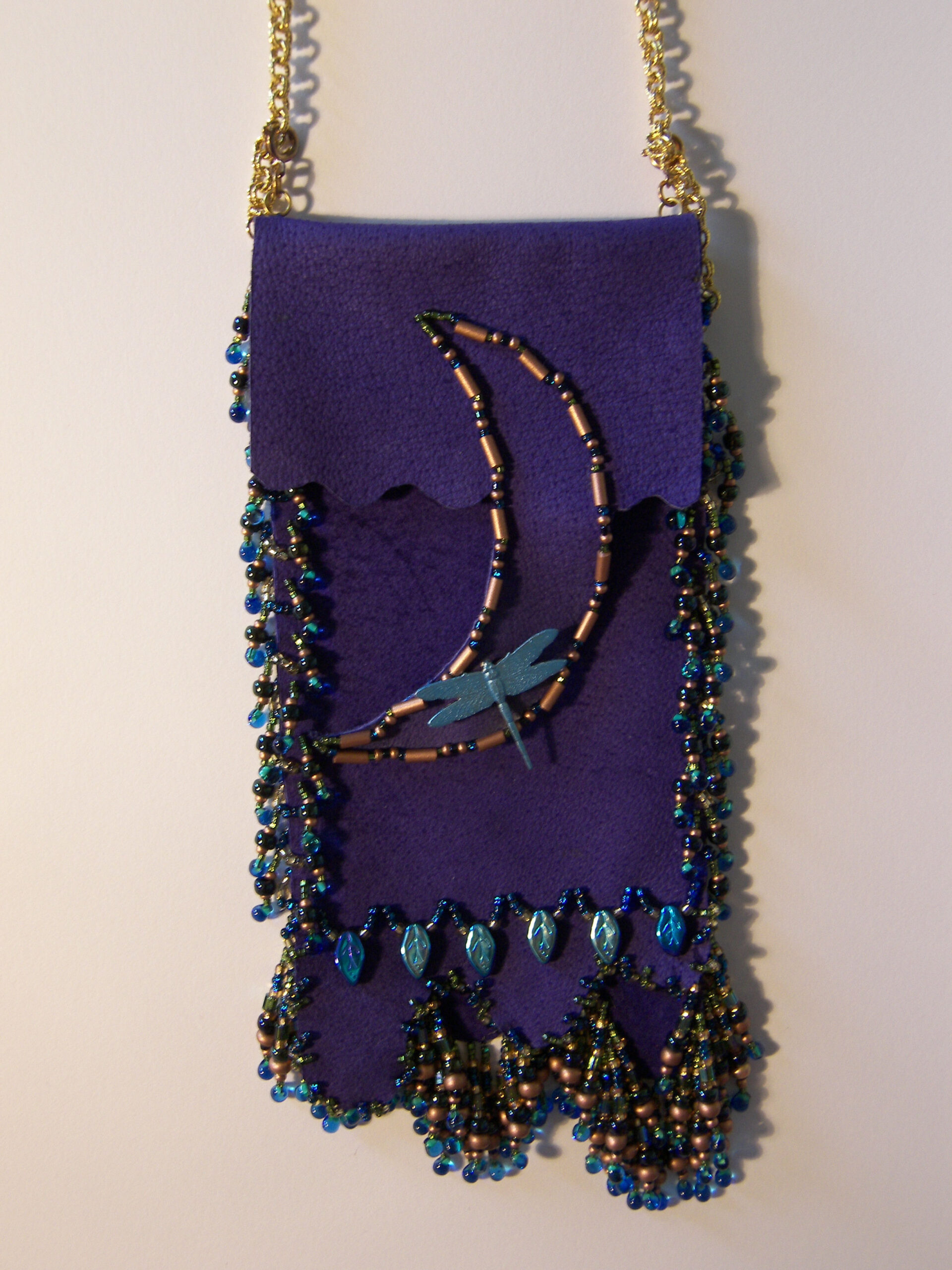 I wanted to do something amazing with it – something using all the beautiful new copper and blue-green drop beads I had in my collection. A friend of mine was also experimenting with painting metal charms and this idea also intrigued me, so I pulled out a small dragonfly charm that was part of a lot I had asked a local jewelry store to make for me that had turned out terrible. They had botched the silver finish and more than half the gross I had ordered were bubbled and flaking on the surface. They refused to redo the job and eventually went out of business (no surprise – they were not customer-friendly!), so I was stuck with all these messed-up pieces I couldn’t use as is. I was hoping repainting them would salvage them for future projects.

The touch up was good enough to use on this one project. I also wanted to make this bag stand out as something not just for sacred pieces, but as a sacred piece itself. Hence the crescent moon shaped flap came into being and I went to work on the insane amount of draped fringe along its edges and bottom.

The result was stunning.

Dragonfly Moon and her Family

The Gem & Jewelry shows in Santa Monica were winding down after 10 or so years and I was getting tired of the long commute and the non-jewelry vendors that were showing up with their tables and tables of cheap sunglasses from China (literally – this was what was starting to infiltrate the BEAD show). It was around this time that the Pasadena Bead & Design show was born.

My first time attending, there was an amazing vendor of diachroic glass “donuts” – large, round focal bead pieces in an amazing array of colors. The one pictured captured my eye among all the ones I had purchased. It fit the color motif of some acrylic leaves and glass flower beads I had contemplated using for this next pouch.

At this same jewelry show, I found a kumihimo disc vendor. I was starting to explore the world of knotwork and had obtained a book of nothing but knotwork techniques, so the timing was perfect for me to pick up this next, interesting art, using it for the creation of the strap. Now the strap would be smoother and stronger than my previous ones. My art was evolving!

Dragonfly’s Flight or Path of the Dragonfly 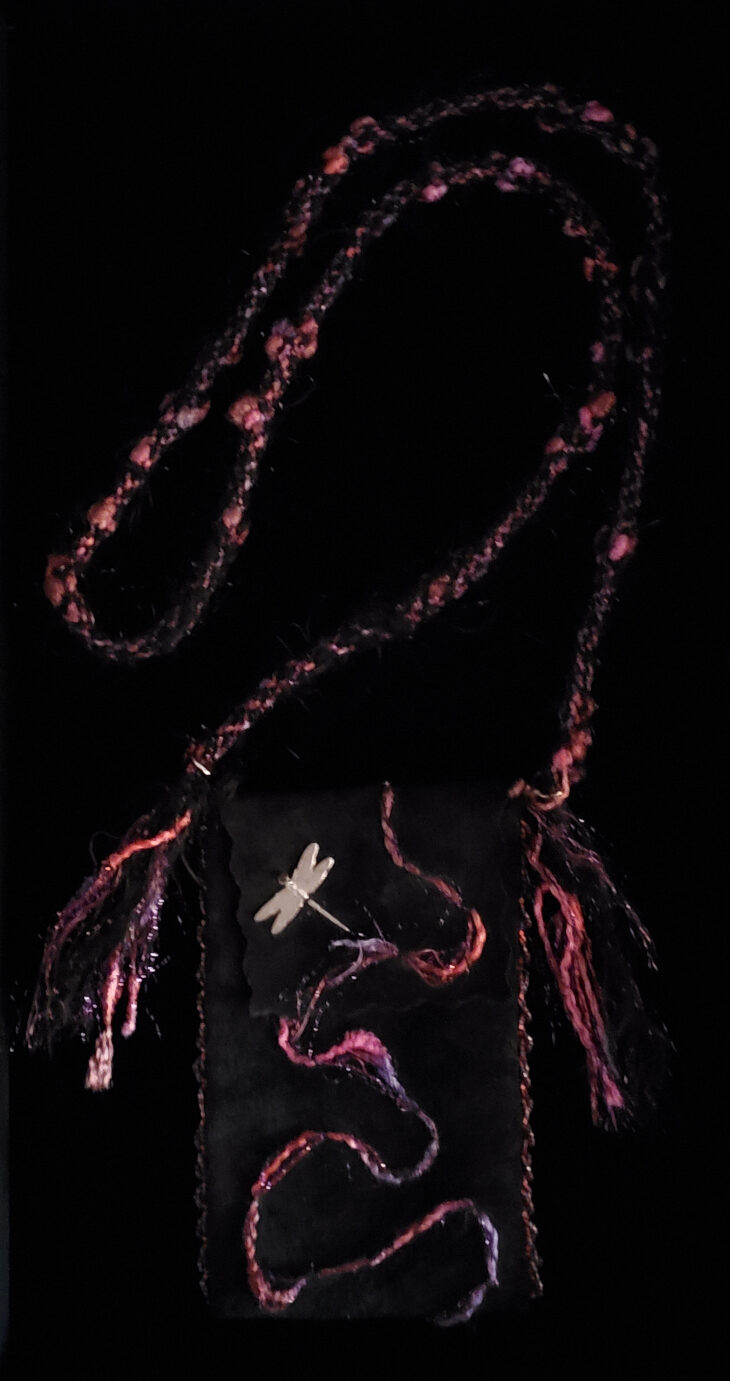 I was still in love with the Italian imported yarn at this point and wanted to do one more bag detailing the seemingly erratic path of one of the insect world’s most fascinating creatures. Since then I have come to understand that their paths are not random or erratic, they only appear that way to the casual observer who doesn’t stop to watch them for more than a fleeting moment. They are always on the hunt for food – or a mate, but their flight is always directed and with purpose.

This was also the last of the experiments with kumihimo knotwork to make a strap. I added the usual seed bead edging to the sides to hide the seam where I had joined the front and back of the bag, making it in a new, twisted pattern. The other difference between this one and the others is in the cut of the flap. I used a pair of Fiskars decorative shears. It was so hard cutting through the leather, however, this was the first and last time I attempted it.

These next pieces are ones I have done over the years. In all cases they are one-of-a-kinds, though I do still have more fabric in my fabric stash if I ever want to recreate them.