admin Posted on March 13, 2019 Posted in Finding your place in the Universe, Gallifrey One, The Life of a Bead Whore No Comments Tagged with appearance, creative madness, doctor who, handmade, jewelry 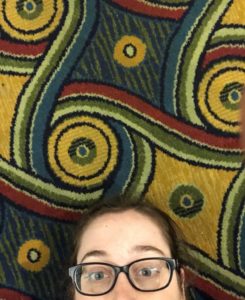 It’s hard to believe it’s only been weeks since Gallifrey One 2019 ended. It seems like so much longer! And, as has become an unfortunate tradition in the 28 years Dennis and I have attended this wonderful convention, we both caught con crud. Hence in part why this update is so late. (<== picture me laid out flat for TWO DAYS from work, looking like this Gally carpet-worshipping fan I found on Twitter) The nasty little bug came and almost went TWICE, so I went and got antibiotics for it Monday.

It was once again a fabulous year of amazing entertainment, the highlight of which was the ribbon collecting war between Catherine Tate and John Barrowman. Barrowman, being the shy guy he is, came out on stage Saturday in a dress in an exploding tardis print in vibrant yellows and blues. Catherine showed him up the same day, demonstrating how long her ribbon trail was. She had a helper hold it on stage and went out into the audience trailing the end – which was easily two-thirds of the length of the ballroom! As you can image, her bragging about it being longer inspired all sorts of hysterically rude comments from John. Makes up for missing all the other programming outside the main ballroom! 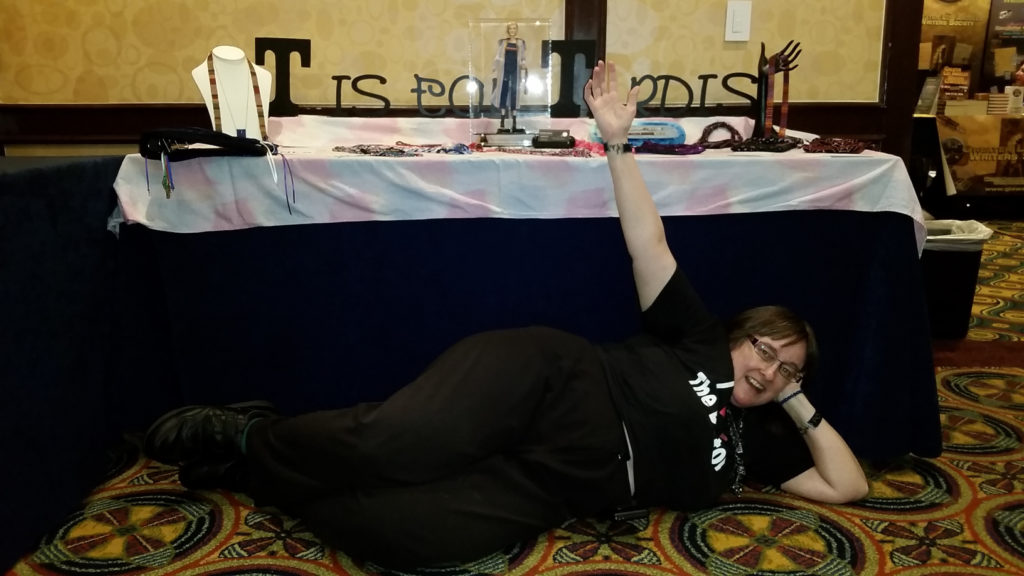 After all the sales have been tallied up and the thank yous done, I kicked into high gear. Even as con crud was trying to slow me down, my brain was non-stop forming plans for what to do next. While all the beading for the Gallifrey One 2019 Art Show was fun, it was also hard work towards a purpose. After a couple of years away, I really want to get back into jewelry full time and this time have more fun doing it. Yes beadwork of this intensity is hard work, but it’s work I LOVE. And when you love what you do, REALLY LOVE what you do, burnout doesn’t exist. When I finished the 5th Doctor’s bracelet, I jumped straight into beading 13s necklace without a single day’s break. When it was apparent I wouldn’t finish it in time, I went back to bracelet ideas and did one for the 11th Doctor.

I even set aside my fanfiction writing for a month because the beading bug wouldn’t let me go. And while I also dearly love creative writing I never regretted my decision to trade one fun project for another for a time. 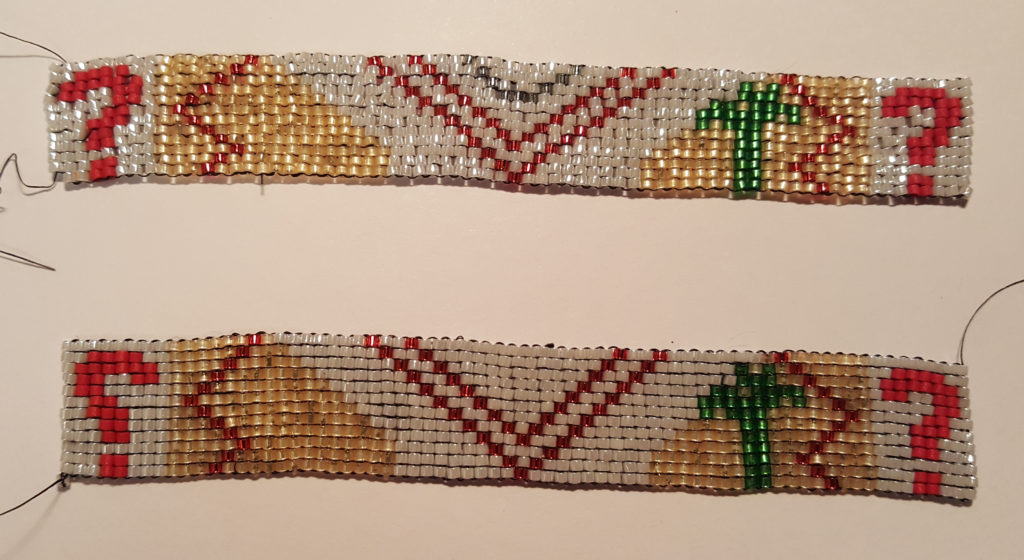 So where – you might ask – am I going from here? Forward and up and never looking back. I can’t bead fast enough, there aren’t enough hours in the day to fuel this bead machine monster Doctor Who fandom has created. The beadwork for a new 5th Doctor bracelet is done – and it is a vast improvement over even the one that sold at the convention. See for yourself. The top one is the 1st version, the bottom bracelet the one that went into the auction (and sold).

Happily my rows were straighter and neater, there was less of a wobble to the overall bracelet and I fixed the orientation of both question marks so they face each other. It always bugged me they faced the same direction in the original design. And if ever there was a sign that doing what one loves is what we are meant to do in life, then improving one’s technique is the proof in the pudding!

And it’s beginning to show

It amazes me how much repetition and getting advice from experts can make a difference – and how fast it has manifested. This third version has really come so far in just a few weeks that it has me absolutely tickled. This is by no means the final product. That will come as I work on it this week. And I cannot wait to show you wonderful folks the finished product!

Stick around and as River Song said, “You watch us run!”.